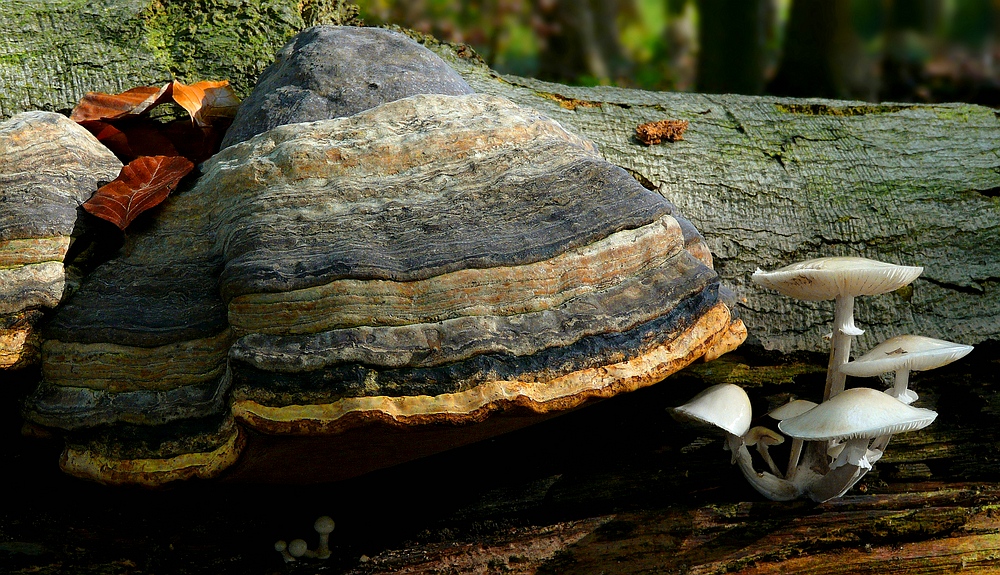 The Hoof fungus (on the left) was already used by ancient nomadic people as tinder for fire starting and to transport the fire from one place to another as it burns very very slowly and can smoulder for many hours.

Can be found all year round.

This fungus is a survivor. Each year, it gets a little wider and deeper as it resumes growth in the spring with a new and good visible annual ring.
The giant specimen in the shot must be already more than 10 years old !!!

The Porcelain fungus (on the right and bottom) is a white, slimy wood-rot fungus and is strongly tied to rotting beech, on which it grows in clusters.

It got its name by the layer of transparent mucus that covers the caps and so imitates porcelain.

Something VERY interesting to know :

The Hoof fungus is one of the fungi that the "Iceman" had with him.
You remember the Ötzi Iceman, don’t you ? An incredibly well-preserved 5000 year old Neolithic man found in 1991 in a glacier near the border of Austria and Italy.

During profound scientific research of the content of Ötzi’s pouch, the scientists found berries, a dozen of different plants, 2 birch bark baskets, and 2 fungi species : the Hoof fungus (as part of a kit to make fire) and the Birch Polypore (known to have antibacterial properties and was probably used for medicinal purposes).