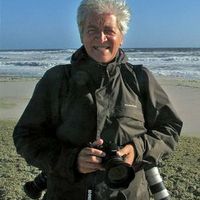 Fond of photography since he was a young boy, in 1969 Saro started dedicating more and more attention to it and began to transform an inclination into a profession.

He and his son Luca collaborate with tour operators and with advertising, graphic-art, and marketing studios. Their interest towards history, art and the world's different civilizations has led them to visit many foreign countries, where they have taken a considerable amount of pictures. Saro & Luca have created audiovisuals for the travel trade ("The United States", "Turkey", "Ravenna and its Art") and for industry. Their articles and photographs have appeared on various pubblications.

"The cosmos rolling around us is a steady and endless mixing of curves and lines which stand side by side, run parallel together, split, go crazy, cross over each other, run away and then come back together.
While doing so they give birth to matchings and melodies, shadows and colour contrasts.
One must stop, stand still and wait, often with extreme and endless patience, and then catch them, exactly in the right spot and exactly at the right moment, neither a single second too soon nor one too late.
That's how I try to "paint" a line or two of poetry on film". Saro Di Bartolo

"Saro Di Bartolo dedicates extreme attention to every detail, his photographs stand out for the value of their composition, the care with which he explores each possible framing. During his travels he has gathered together a rich wealth of images: the fruit of intuition and sensitiveness, aesthetic diligence and rule over his technical tools. Photographs that stand out for the utmost quest for absolute formal rigour. As confirmed by his personal work and exhibitions, Luca is following in his father's footsteps with the same creativeness and ability. When photography manages to reach such high levels its become an expression of pure art. Seaching for the symmetry, harmony and poetry in the world surrounding us has become for them the essential must ".
- from a presentation by Pino Parini, Professor of Portrayal Psycology at
ISIA - "Higher Istitute for Art Industry & Design" in Urbino Italy

Various institutions and companies, in the most different fields, have entrusted their promotional messages to their pictures.

Experiences
Among his most significant awards and most recent experiences:
United Airlines, the world's leading airline awards Saro with the Grand Prize at its "International Travel Photography Contest - 1993" (first out of 15.000 participants from all over the world).
The Ministry of Tourism of the Republic of Turkey, awards Saro with the Special Environment Prize, on the occasion of the International Photography Contest to celebrating its 30th anniversary.
The Cd-Rom "Cultural Tourism in Emilia Romagna", of which Saro and Luca are the authors, wins the First Prize at the 12th International Tourism Film and Cd-Rom Festival in Varese. A contest featuring the participation of 26 countries and under the patronage of Italy's Prime Minister.
Winners of the 1st Prize at the "Turismo & Attualità National Photography Contest" Rome, in December 1998 and again in December 2000.
Saro is the Italian Reporter at the Conference "A Multimédia e as Novas Competencias dos Profissionais do Turismo" - INFT / Bolsa de Turismo de Lisboa ‘99.
Idea, architecture and supervision of the Manual "Geography for Tourism" published by HIT -and Italian Automobile Club.
Author of the Cd-Rom "Museums & Art Collections in Emilia Romagna"," winner of the 5th "100 Art Cities European Multimedia Contest". May 2001.
The cd-rom is part of the European project called "CU.L.TUR.A – Museum Wealth and Information Technology"
Photographs for the Book - "Il Racconto di Rimini - The Rimini Story" by Giampaolo Proni, published by Itacalibri at Castel Bolognese in July 2002

After a very selective revue, two photos by Saro & Luca Di Bartolo were chosen for the 2005 edition of the prestigious Inner Reflections Calendar, attracting the finest nature photographers in the world and winner of 55 Gold Medals.
ln 2004, invited by the “Centro per la Fotografia" of the Republic of San Marino“ two of Saro's works join the “Museo dell’Immagine”, side by side with photos by world famous masters, such as Gianni Berengo Gardin, Ken Damy, Mario De Biasi, Larry Fink, Franco Fontana, Art Kane, Pete Turner and others.
The ancient and prestigious British institution “Universities Federation for Animal Welfare” selects an image by Saro for the cover of its 2003-2004 Annual Report - “Science in the Service of Animal Welfare”.
In 2005 Saro's images are chosen for the book "I Colossei nel Mondo" - Colosseums in the World - edited by Cosmopoli, Rome.
SPLASH – Water for Life - Together with the international photographers Mike Goldwater, Tim Fitzharris and Fabrizio Ferri, from 5 to 10 April 2006 his works are on show at "Emporio 31" in Milan.
In 2007, his pictures of ancient Greek and Roman theatres are selected for the prestigious book "Theatra", by Gruppo Bancario Capitalia.