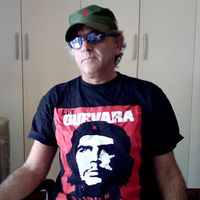 "I traveled to Cuba for the first time in 1993. What surprised me was the dignity of the Cuban town and the great force with which everybody fought against the embargo, without resigning to the revolutionary ideal. The smiles of the people on the street, the cordiality and the hospitality toward me were like a spell, a memory which I always keep in my heart, day after day." —Ronny Leva
from: http://www.thescreamonline.com/photo/photo4-1/leva/index.html
Ronny Leva was born in 1954 in Lecce, Italy. He graduated in Architecture, but soon left the profession to open a gallery in Lecce to sell fine offset prints by photographers, painters, and artists such as Miró, Kandinski, and Chagall. During this time his love for photography grew, and from 1993 to 1997 he visited Cuba many times. He is most fascinated by the color of the land and the passion of the Cuban people. Many of his photographs have been published in Cuba as postcards and are still very popular. His photo "15 años con bandera" was chosen for the International Magazine of Cuban Aviation Sol y Son. More of his work was recently published in the Encyclopedia of Cuba (Greenwood Press) by Luis Martinez-Fernandez of Rutgers University, New York.
For some Cubans, the car, as taxi, is their main source of revenue, earning up to $50 per day in an economy where the average Cuban makes $15-25 a month. From the examples in Ronny's photos, one can see the results of the attentiveness that each car receives from its owner. Some sparkle as they did the day they emerged from the factories of Detroit. —Stuart Vail