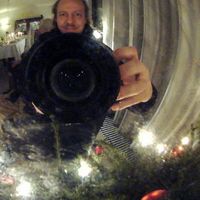 I am mostly a nature photographer, in part because I travel a lot and when traveling focus on hiking. But also because "Natura Artis Magistra". And indeed I now take many trips to the Amsterdam zoo that has that motto above the gate and is therefore called 'Artis'.

My father had an amateur photo studio, so I dabbled a bit with that and even made some photo-reports of football matches for the school magazine.

After that, for 20 years I never took another photograph, especially when traveling, because I didn't want to miss what I was seeing (and cursed the idiots who thought they had the right to elbow themselves in front of me because they were holding a camera).

In 2001 I got a (subsidised) job as a product photographer for a company that couldn't afford a real one. So my interest was rekindled. So I for once tried taking a camera with me on a trip. The results were such that I thought I might make a living doing this. Still, though, I look first and photograph later.

The nice thing about photography is that I spend my time searching for beauty.

Actually, that's precisely what I do. I got some questions about photos of mine here, how I set them up. Well, I don't. I'm much better at recognising beauty than at creating it. On top of that, I often have doubts about manipulating a scene, feeling that that is manipulating reality, which is akin to lying. This can even be something simple like pushing a brach out of the way.
Funny thing is, though, that when I get home I start deleting unwanted elements. However, I always keep the original and keep it's name in every manipulation, so people can (in principle) always find out what the scene really looked like. That way it's not falsification of history, something I abhorr.

Photographs are a great record for future historians to see what life was like there and then. So I also take loads of photographs of everyday situations, with no aesthetic interest whatsoever.

I also encode the Photoshop tools I used to manipulate the photograph in the name (usually in the order in which I used them). And I put that original name in the description below the photograph. In case you want to know what the codings mean, here are the most used letters:
h histogram (levels)
k curves
r rotate
c crop
s stamp
(s) selection; the manipulation applied to only part of the photograph

Apart from the early dabblings with my father's camera, a Zeiss Ikon Contessa, I have only used digital cameras.
My first camera (2003) was an Canon Ixus 400, great for macro photography, so I did that a lot. Then I bought a Nikon Coolpix 5400 because of the swiveling screen, which I really missed for the macro photography. Then in 2007 I came across a downpriced Sony DSC-H5 and switched to the other extreme, tele. In nature that means switching from insects to bigger animals. Alas, in zoos those have a tendency to come too close when I approach the fence. :) I have yet to try zoom 'out in the wild', though.

I thought about buying a full frame camera, but then a friend let me play around with his for a bit. After half an hour the 300 mm lens gave me a backache. And with a full frame that's only 6x zoom. On my, in comparison tiny, DSC-H5 I have 12x zoom. I'd need a whopping 600 mm lens for that with a full frame. No, thank you, I'll stick to small sensors. A disadvantage, though, is that they differ in size, so add-on lenses aren't interchangeable. So I won' t be buying any of those, I suppose, until a standard emerges here, as did the 50 mm standard in analog photography.

I suppose I know Photoshop better than I do my cameras because abovementioned job required much use of that program. However, after msWindows crashed on me for the thousandth time or so I decided to swith to Linux and haven't looked back since (in over five years it hasn't crashed on me once). That is ... Photoshop hasn't been ported to Linux and Gimp sucks. So I work on my photographs in my boss's time.

I am rather opinionated about a lot of things, including photography terminology. For example, I don't talk of 'film speed' and 'shutter speed' because those are misleading terms (it's not about the speed of the film and the shutter). Instead I call them 'film sensitivity' and 'exposure time'.
Also, 'resolution' is not a measure of the amount of pixels but of pixels (or dots or whatever) *per cm* (or inch or whatever). Using the same word for two different things is just confusing. Remains the question what to call 'the amount of pixels'. Photoshop (which avoids the issue by nog using the word 'resolution') calls it 'image size', so I'll stick to that. Which leaves the problem of what to call rendered versions, such as on a screen or a photograph. For the latter I use 'photo size' and the former doesn't really need a name, I suppose.

Things I don't like:
- Flowing water with long exposure. I believe 'cheesy' is the word for that.I like quite the opposite, splashing water 'frozen in time'.
- Too big frames around a photograph. A frame that is just visible can sort of 'lift out' the photograph, but too much is (as always) not good.
- Signatures on photographs (unless very subtle), and especially silly drawings.
- A texture superimposed on a photograph. Especially withered roses in monochrome with a vague sort of spiderwebby texture superimposed. Yuk!

It seems there are more things I don't like than I do like. What does this say about me? :)