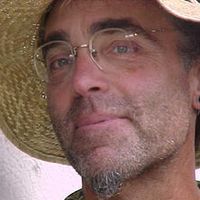 Cisco “Craig” Dietz de Baldenwig was born in Hollywood, California in 1952 to Swiss and German parents. He studied at the University of Los Angeles as a fellow in the prestigious UCLA FILM SCHOOL where he graduated with honors in 1974. While working in Los Angeles as an art, editorial and commercial photographer from 1975 until 1983, he discovered the Polaroid Emulsion Transfer process (PET) and was subsequently awarded several grants from the Polaroid Corporation to pursue his experimentation in this medium. Museums and private collectors throughout the USA collected his artwork. During this period his work was exhibited at numerous galleries and museums.

Exhausted with the speed and size of Los Angeles he moved to New Orleans, Louisiana where he pursued a successful career in advertising photography for numerous national and international advertising agencies.

In September 1993 Cisco visited San Cristóbal de las Casas, Chiapas MEXICO and said, ”This is where I want to live”. He immediately bought a home and began a more relaxed and centered life. Cisco now concentrates on his photography school, Aper Tours (www.apertours.com) and commercial and editorial photography assignments. He also has developed local acclaim as a metal artist. His design studio, 23 DESIGN, is working with local and Mexican national companies to promote San Cristóbal de las Casas, Chiapas as a design center. In September 2002, he opened a fine arts gallery, Galería Studio Cerrillo, to bring fine visual arts to the people of San Cristóbal.

Cisco’s recent photographic work, which combines traditional and digital photographic processes, includes; LA GENTE DE CHAIPAS (The People of Chiapas), which is an extensive look at the face of the diverse groups of people that occupy Chiapas. This work is currently being assembled into a limited edition portfolio, LA GENTE DE CHIAPAS, to be available in early 2005 following considerable success with this body of work in 2003. Two images were selected for the 146th Royal Photographic Print Competition.

In October 2003, a 50-piece photographic show opened at the important exhibition center of Caja Ahorra Mediterráneo in Alicante, Spain.

Three concurrent shows were held September and October 2003, in Mexico, all celebrating the tenth anniversary of Foto Septiembre, a world wide celebration of the photographic image.

He is also pursuing a panoramic photographic series exploring the natural settings of the Comitan Valley, Chiapas Mexico.

Cisco’s fascination with the human form has pushed him to produce a new body of large disassociated nudes called SHE/ME; in which, Cisco first photographs his female subject then directs her to photograph him both in a random puzzle fashion. These are then assembled into large scale, one meter by two and half meters (39”X 123”) images. These assembled images have a cubist sensibility of the disassociated self. They can be mixed and matched and reassembled into a unique whole. The first public showing of this body of work was at Studio Cerrillo in San Cristóbal, Chiapas in September 2003, to much public acclaim.

Cisco’s newest work apart from Chiapas is an extended and elaborate look at the city of Paris. This body of work is digital and is printed to a very large scale, one meter by one and a half to two meters (39”X64” to 79”).