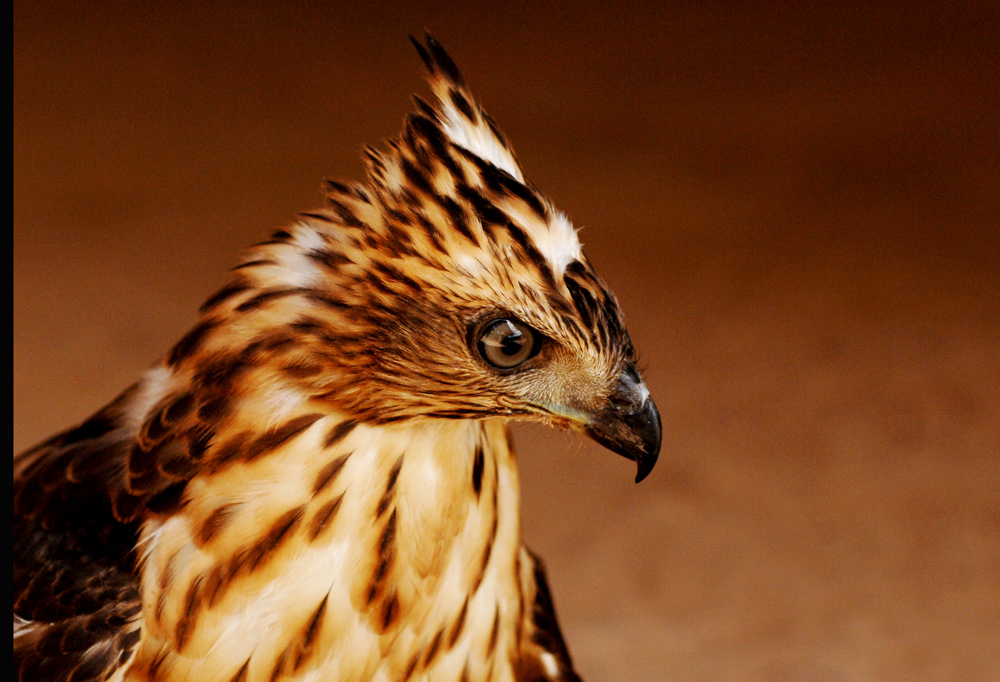 There are times in our live when we hit the pits of hell!!
Most of us have been there one time or another, this young bird of prey we caught on the bank of the mighty Mekong River in Luang Prabang, and it had some black plastic twine caught around its leg and around the roots of an old bush.
I approached it very slowly, so that it would not try to fly away in a flurry and injure its leg.
I removed the twine from the bush and held on to the one end; I made a loop knot and fitted it to the other leg, so I could undo the twine twisted to its other leg.
Then off to the restaurant close by.
I put the bird on the floor and held on to the twine I watched as it walked around to see that its legs were fine and ordered a bowl of water and some uncooked beef.
I tossed bits of meat close to the water bowl, so that it could see the water and drink of it.
After it had a good feed and rest for about an hour I decided it was time for liberation.
Walked down to the edge of the river and offered the back of my hand for it to grip its talons into.
I held onto its feet and raised and dropped my hand several times to check it wings, they were fine so I removed the twine and waited till it was ready to take to the skies.
After a while it started flapping its wings and suddenly took off, I watched as it climbed higher and higher up into the thermals, then it automatically started soaring like an eagle.
I suddenly realised that we all need liberation so that we too can soar like the eagles above.

Now my friends, In the last two days, I have spent over 13 hours on the net, I cannot tell you how many hundreds of times we were disconnected, but in that time I could only answer 28 comments.
So please be patient, I will eventually get to answer them all.
I am flying to Singapore early Friday morning and then to Perth West Australia.
It has been a long visit in Asia this trip, I arrived in Thailand in January, so it will be good to get back into the west once more, and to see family again.
Best wishes and bless you all.

For those wishing some more recipes, here are some of my favourites.

This is an old Thai recipe I heard on radio in Karratha about 20 years ago; I tried it out a couple of nights later and it was well received.
Three years ago, I entertained a group of Westerners and Thai’s in the city of Udon-Thani, I decided to try it again and it was a big hit.
I believe it to be a southern Thai dish as the northerners are not familiar with the recipe.
I used both Spanish mackerel and salmon steaks for this recipe, try your favourite fish.

Select 4 good steaks or fillets to feed your family and dust them with some corn flower and lightly fry both sides, then place the fish on some absorbent paper towelling.
After the oil has been absorbed, place the fish on a baking tray and bake on a low heat in the oven for 10 minutes.
Now you will need the following ingredients to prepare the sauce;

Place the butter in the pot that you will prepare the sauce in and warm till molten, add the garlic, ginger, lemon grass, kaffir lime leaf, coriander leaves, spring onion and chillies.
Sauté for five minutes constantly stirring, then add the sugar, salt, lime juice and tamarind paste, stir for a further 2 minutes.
Now shake the coconut cream well before opening and slowly pour over the contents in the
pot while stirring, bring slowly to the boil.
Then turn off the heat.

Select a serving dish for the fish and pour a third of the sauce into it, next pack the fish onto the sauce.
Gently pour the rest of the sauce over the fish and place in a low oven for ten minutes and serve on a bed of steamed or boiled rice, you can garnish with some of the coriander leaves.
If you would like a vegetable with dish, try this simple tasty Vietnamese cabbage.
Finely chop ½ a cabbage, two clover of crushed garlic a ¼ teaspoon of freshly ground black pepper, toss into a frying pan, some good quality olive and heat, add the garlic first for a minute, then the cabbage and black pepper.
Fry for about 5 minutes, so that it is still a little crispy, sprinkle with a little soya sauce and stir well.
As simple as that!!
Sep illy (delicious) enjoy (dee jai).
The walkabout Wok.


Sosaties (Chicken Satay)
This is an old favourite of the South Africans; it is a culmination of the early Dutch East Indies spice company members who settled in the Cape of Good Hope in Southern Africa in the year 1652.
They brought together with them a group of Malay Folk, who they believed were the masters at blending the spices.
These folk were responsible for many of the dishes still eaten to this day, including the finest sausage I have ever eaten, named by the Dutch as “Boere Wors” translated (Farmers Sausage) as well as the spices used in biltong (dried beef) not to be mistaken with jerky.
I will deal with that later, for those who produce their own sausages and mince.

You will need the following for the marinade;
A good sized sealable plastic bag from the cooking section of your supermarket.
I think they are wonderful, because no washing, and you may freeze the marinade afterwards, they also do not leave any smells in you refrigerator.

2 chicken breasts or according to your families size, cut into 25 x 25mm pieces
100 Gms. Dried apricots chopped
50 Gms. Sultanas chopped
2 cloves of crushed garlic.
30 Gms. Crushed ginger
1 large brown onion chopped
1 Tbs. soya sauce
3 Tbs. olive oil
A good pinch of salt
½ teaspoon of turmeric
The juice of a lime
¼ cup of natural yogurt
1 pack of bamboo skewers, take out as many as you need and soak in warm water
Drop the chicken piece in your bag; mix all the other ingredients in a bowl and pour over the chicken.
Seal the bag and place on a plate in the fridge for two days, turning the bag around several times whilst it is steeping.

Toss the butter in to your sauce pot and add the garlic, chillies, chilli powder, coriander powder and soya sauce and stir on a medium heat, next add the sugar, coconut cream and bring to the boil, add the peanut butter and stir until well mixed, last of all add the yogurt.

Now place the chicken pieces on the soaked bamboo skewers using onion pieces a spacers
With a pastry brush paint the sosaties with some olive oil and grill on both sides till golden brown.

Add 1 teaspoon of turmeric to your rice water before cooking it; this will add some colour to the dish.
Place the sosaties on a bed of the yellow rice, pour over some sauce and garnish with crushed peanuts and sliced spring onions.

From the Walkabout Wok.