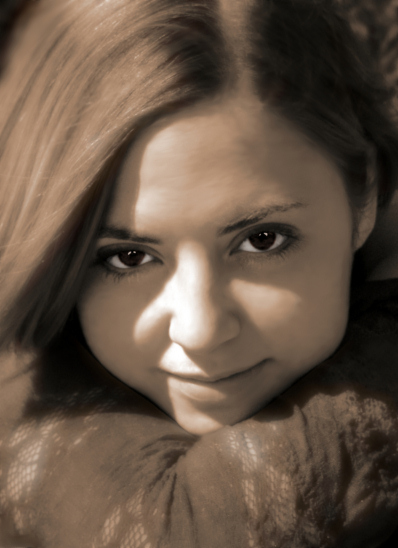 When I took this photo I wanted to see as much clarity as possible and blur out everything out later in post production, so I stopped up my apature to F8.0 in the bright sunlight it was almost perect at ISO 64 and a shutter of 200 but it was a slight off so I changed the shutter to a bit shorter at 160 then took it again. I was using a Pro Master 2 Tripod and a Sony DSC-F828 Digital Camera set to the highest resolution at 8 Mega Pixels. Only natural light was used, The model was faceing eastward at about 3PM early Mid Fall in the northern hemisphear. I used the clarify tool around the eyes then I desaturated the picture from a color photo and added in the brown hue to the eyes afterwards. And set my smudge tool to 40% opacity and 1% hardness and about 80% Density.