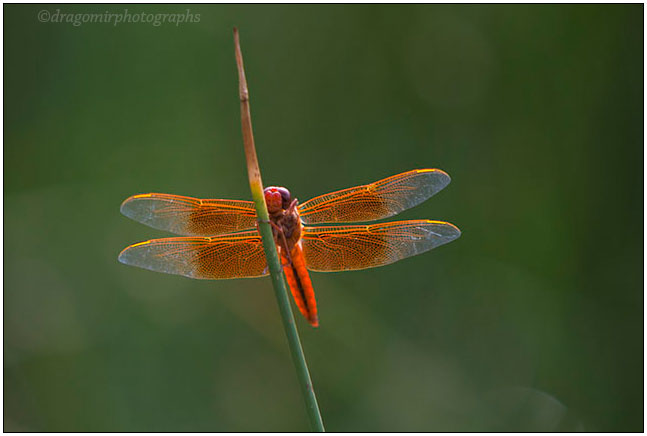 Dragonfly is the metaphor for our own transformations out of the depths of our emotional dramas into a place of freedom. A place we could equate to going when we depart this world. Thus, the red dragonfly may emerge around death with the soothing message that this transformation will carry us to freedom and eternal love. In Japan the dragonfly is considered to be very sacred. Red dragonflies appear most often there at the end of summer with the message that autumn is coming. A beautiful Haiku poem reads,” That the autumn season has begun is decided by the appearance of the red dragonfly.” The Japanese embrace the dragonfly as a symbol of courage, strength and happiness while the Native Americans speak of the dragonfly as bringing a time of rejuvenation after a long period of trials and hardship. Both of these interpretations bring us hope after the death and loss of a loved one. Further, the Native Americans perceived dragonflies as the “souls of the dead” so a dragonfly visitation around a loved one’s death could well signify the loved one’s soul taking form in the spirit of dragonfly. It offers the assurance their soul is free. Red dragonfly says we must see through the illusions in life for then we can make this great transformation while still in body and life, before death. As above, so below. If we can lighten our load and evolve into the vibration of light in the body, then we will find the ability to adapt, bend, flow, change, shapeshift, transform and fly now. The significance of red dragonfly reflects our need to work lovingly on this earthly plane, to ground the higher spiritual forces within us to the earth beneath our feet and to celebrate our capacity, like dragonfly, to move between worlds and bring a little bit of heaven to earth.