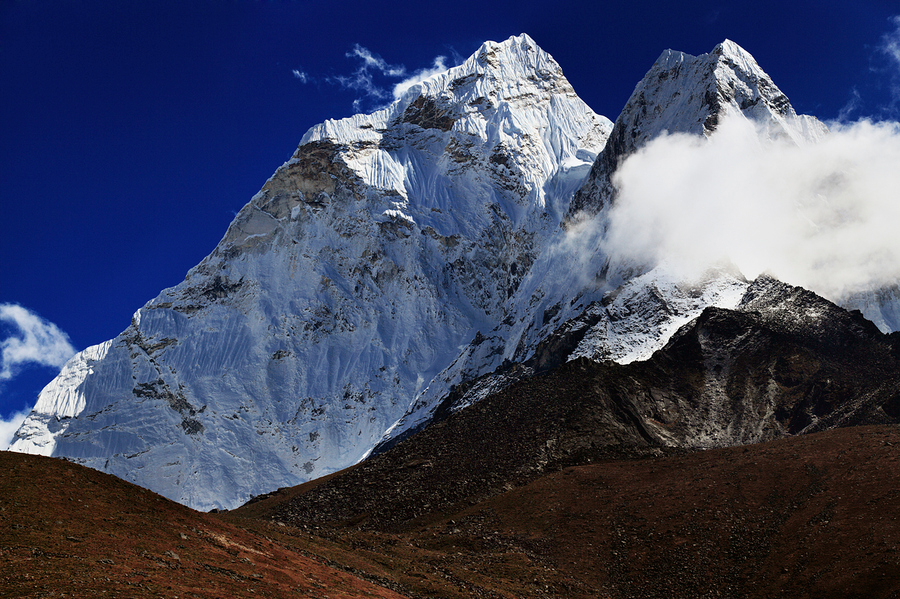 Ama Dablam located in the Himalaya range of eastern Nepal. The main peak is 6,812 metres (22,349 ft), the lower western peak is 5,563 metres (18,251 ft). Ama Dablam means "Mother's necklace"; the long ridges on each side like the arms of a mother (ama) protecting her child, and the hanging glacier thought of as the dablam, the traditional double-pendant containing pictures of the gods, worn by Sherpa women. For several days, Ama Dablam dominates the eastern sky for anyone trekking to Mount Everest basecamp.
Ama Dablam was first climbed on 13 March 1961 by Mike Gill (NZ), Barry Bishop (USA), Mike Ward (UK) and Wally Romanes (NZ) via the Southwest Ridge. They were well-acclimatised to altitude, having wintered over at 5800 metres near the base of the peak as part of the Silver Hut Scientific Expedition of 1960-61, led by Sir Edmund Hillary.
Ama Dablam is the third most popular Himalayan peak for permitted expeditions. The most popular route by far is the Southwest Ridge (right skyline in the photo).Climbers typically set up three camps along the ridge with camp 3 just below and to the right of the hanging glacier, the Dablam. Any ice that calves off the glacier typically goes left, away from the camp. However, a 2006 avalanche proved otherwise. A climbing permit and a liaison officer are required when attempting Ama Dablam. As with Mt. Everest, the best climbing months are April-May (before the monsoon) and September-October.
For its soaring ridges and steep faces Ama Dablam is sometimes referred as the "Matterhorn of the Himalayas."