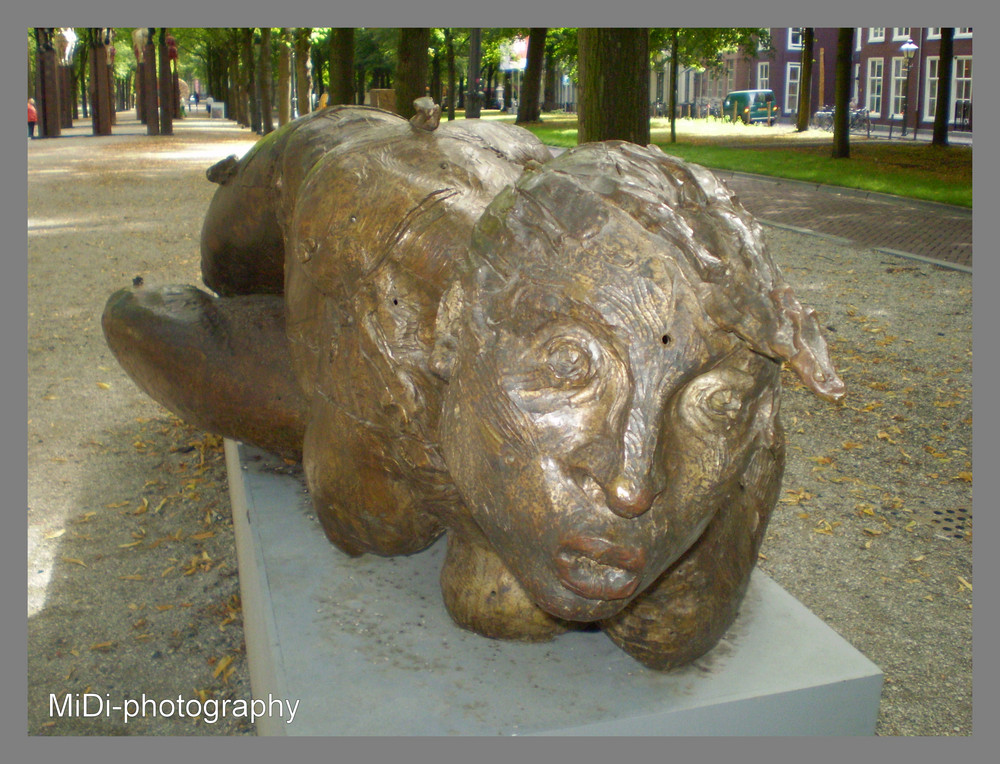 This year, in the historic heart of The Hague, The Hague Sculpture will present the Mexican artist Javier Marín with works made in bronze, marble and polyester resin. The Hague Sculpture’s choice for this one-man exhibition represents a new direction. The Voorhout is a pre-eminently suitable location for a wide-ranging audience to make a seemingly chance acquaintanceship with contemporary sculpture. It is a spot that more than ever before invites you to take a stroll amidst charming trees and historical buildings, and particularly a place that lends itself for an exposition of monumental sculpture. Javier Marín has proved that his voluminous sculptures can make a profound impression when presented in the public space. His work has been exhibited in Mexico City, Madrid, Pietrasanta and recently also in Milan, among other places on the plaza in front of the Scala Theatre and besides the Dom in front of the former Royal Palace.

The exhibition will be prepared by John Sillevis, guest curator of The Hague Sculpture in 2009 in collaboration with the Galleria d’Arte of Barbara Paci in Pietrasanta, Italy.

In addition to monumental works on the Lange Voorhout and the Korte Voorhout, smaller sculptures will also be able to be viewed in a number of exposition rooms of the painters’ society Pulchri Studio at Lange Voorhout 15 in The Hague.

Javier Marín produces metre-high heads in baroque style, men with streaming locks and women with expressive faces. The sheer size of the sculptures alone gives them an element of divinity, their stone-red colour bringing them boldly to the fore, their mere presence granting a new dimension to space. The fact that the heads seem to be scattered about as fragments in space evokes associations of a battle having been fought between the gods and the titans, the remains of which have now become visible. `

Javier Marín also makes sculptures of warriors on horses. These too seem to be returning home from a historical battle, although it is not clear whether as victors or as losers. Javier Marín has left his audience free to draw their own conclusions, or to think up their own interpretations. The conceptual universe of Javier Marín is baroque, but also refers to the monumental art in the pre-Columbian period in his native country. Artistically seen, the traces of Spanish dominance in Mexico are particularly found in its richly ornate churches and monasteries with their baroque holy figures and decorations.
Little of visibility has remained of the world of the gods of the Aztecs and Olmecs, but Javier Marín is fascinated by the symbols and attributes that can still be found in Mexico. As an artist, it is as if he lives in two worlds; the world of colonial baroque with its references to the sculpture of Western Europe, and a world of associations with Bernini and Michelangelo as well as pre-Columbian art. The contemporary element in the work of Javier Marín is nevertheless dominant. The work shows a conflict, an inner battle, but also the result of aggression; figures are tied together, they seem to be startled, sometimes wounded, and we occasionally see fragments of bodies indicating that the battle can also be fought at the level of life and death. With Javier Marín, art is emotion, an emotion that balances on the edge of the shocking reality of today full of fear and horror on one hand and a world of ideal beauty on the other, the edge between the vigour of youth and the decline of old-age. The human body speaks its own language, as with a dancer who tells his or her story by means of movement. Movement that may be sacred or harmful, but also vulnerable, or worse still, hurt, defeated or in an intense state of desperation or resignation.

An important part of the exhibition is formed by two enormous circles filled with fragments of human figures. Javier Marín associates these circles with the Aztec goddess Chalchihuitl, the wife of the rain god Tloloc. She is the goddess of rivers, lakes and streams, and the source of ever-emergent life. These monumental sculptures depict the dissociated attitude to life of our times, with its hasty pursuit of beauty and its fear of sudden destruction.
*

Javier Marín
.
Javier Marín was born in 1962 in the city of Uruapan in the region of Michoacán in the west of Mexico. He studied at the Academy of San Carlos in Mexico City – the city where he still lives and works today. Initially he made paintings and drawings, but later started making sculptures of terracotta, polyester resin and bronze. From 1983 on he took part in groups exhibitions; his first one-man exhibition was held in the Casa de la Cultura in Morélia (Mexico). Expositions of his work followed in the Museo de Bellas Artes in Mexico City, in the Espace Pierre Cardin in Paris, in the Mexican Pavillion at the Venice Biennale (2003), on the Plaza de Cibeles in Madrid, on the Piazza del Duomo in Pietrasanta, and currently in the Rotonda di via Besana and the plaza in front of the Scala in Milan.

The critic Santiago Mutis wrote about Javier Marín:
“Nothing in Javier Marín’s art could make us think he is a young artist. His maturity overwhelms us.´

De criticus Santiago Mutis schreef over Javier Marín:
“Nothing in Javier Marín’s art could make us think he is a young artist. His maturity overwhelms us.´