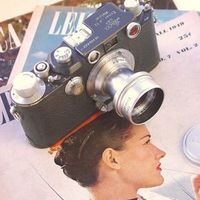 BRINGING BACK THE RETRO FEELING TO GERMANY!

Welcome to the Crazy n Colourful sometimes Black n White RETRO inspired world of KoolGirlieStuff and Digital Retro Photography by Tom Eitnier
I`m one of the leading retro/fetish fashion photographers in Florida, based near Tampa.

I do not shoot TEXTBOOK "Lysol" styled work filled with technical schnik schnak, Retro and PINUP is an artform in itself and the "styling" is what makes the photograph.....not the technical infos, you cannot compare my work with still photography or landscapes and many people who shoot this style of work need to rely on their technical know-how.....for me it`s the beauty and the styling that`s what makes RETRO PINUP photography and if you don`t have the "eye" for it, you can`t shoot it PERIOD!


And now just a little bit about myself:

It all STARTED in Nurnberg, Germany, Thanks to an ex girlfriend Diana Vucic who got me started into retro and fashion photography based on ideas of vintage European fashion and Bettie Page styled cheesecake fetish and bondage in the long lost art of the PINUP girl.

I love retro and vintage clothes and the use of vintage cars and props in my photography, it`s like going back in time for a few hours, like a little movie.

I also use Carl Zeiss and Leica Digital cameras

I like to use colour to it`s extremes in retro styles, also twisted and novel ideas based on old movies, TV shows and vintage fashion.......I`m especially fond of the history of the cold war and 1960`s fashion and spy movies!

Now based in Florida, but I have plans to return to Germany in (2008) for limited TFP (Time For Prints) and PAID COMMERCIAL shoots for agencies and clients.
I`m wanting to express my love of retro, fetish and art nude with aspiring German models.


I`m looking for professional designers, makeup and hair stylists for retro fashion /fetish shoots while I`m in Germany, also any networking and slots to FEATURE my photography work in well known German magazines and also for representation through any interested photo agencies or galleries for
distribution of my work in Europe.

KoolGirlieStuff plans extensive retro fashion tribute sessions shot in remembering some of the Greatest European actresses who have ever lived, DROP EVERYTHING that you are doing and write me if you LOOK or KNOW anyone in D/A/Ch who looks like the following famous actresses

ANY German/Austrian or Swiss based models who seriously want to shoot something really different, you DON`T have to look like someone famous to work with me, just have a SERIOUS ambition and DRIVE to be working in my RETRO fashion and fetish fashion styles.....pack your bags, clothes and makeup our tickets are bought, our final destination is yesterday!

MODELS WRITE ME, I`M HAPPY TO HEAR FROM YOU)

"If your pictures aren't good enough, you aren't close enough."

Robert Capa 1913-1954
(World famous combat photographer and one of the founding members of MAGNUM , killed by a landline in French Indochina (the country now known as Vietnam) in 1954

"I want to be remembered much more for a total vision than for a few perfect single pictures."


PS I would like to say a nice big DANKESCHONE to everyone here at the FC (especially Sarah Boländer) and to all those who stop by and say hello and critic my work, you have made me the most welcome.
This is really the FIRST time I`m getting a reaction about my work in Europe since it`s being published in TIKI LOUNGE magazine 2001/2002 my work is finally being seen back in Germany.
My work is well known in the retro and fetish fashion scene in America, but I hope to cut new ground in Europe, while my roots really ARE still in Germany and it`s postwar culture 1948 to 1968..........once again everyone.