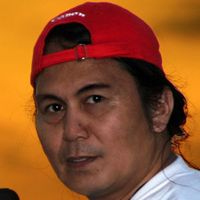 For more than two decades now, George Cabig has been photographing people, places and events for some of the country's top corporations and magazines.
His ability to produce stirring images under uncontrolled conditions made him the preferred photographer for calendars, annual reports and brochures of Caltex Philippines, Bankard, Equitable Bank, Benguet Corporation, Department of Tourism, Kawasaki, PHINMA, Shoe Mart, among others.
Cabig has also contributed photographs for eight books by three of the country's most renowned writers — National Artist Nick Joaquin, TOYM awardee Manny Duldulao and veteran journalist Achilles Mina.
"People at Work" was the first exhibit he mounted when he was just 20. This gave the public a glimpse of the talent and professionalism that earned for him in 1996 the post of senior photographer for Mabuhay, the in-flight magazine of Philippine Airlines. Some years later, Cabig moved to The Business Daily as photo editor. Currently, he continues to contribute to a number of local publications.
To date, he has mounted ten one-man shows, and has won numerous top awards in national and international photography competitions.
To Cabig, what makes a good photograph is a combination of talent, technical experience, personality and patience. A good photographer must have the savvy to portray via the photograph what an artist is able to render on canvas.
"You must have a unique visual sense in your photographs, and confidence in your skills. Composition is another key to any successful photograph. Although optics and technology have an effect on the image, how the photographer composes the image is what transforms the photograph into art. Many images of interesting places turn out to be disappointing if the man behind the camera fails to capture the essence of the scene. His task is to isolate the important elements and somehow convey them in a purely visual way.
“There are no rules; what is important is to maintain a logical approach. Emphasize visualization – anticipating the shot even before setting up your camera. A casual snapshot usually fails in this aspect.”
Most of the time, Cabig carries a Canon camera and several lenses. To him, "Having a wide angle lens, a normal lens with macro, and a telephoto lens will cover any situation."
His pictures aim to create an image that will linger in memory. George Cabig reveals, "This is a re-creation of worlds, of the universe, of people, of the society in which I live and work. My images are an invention that expresses the mystery that glows in my subconscious. These also serve as tangible witnesses to the realities of life in an age of misery and anxiety.”