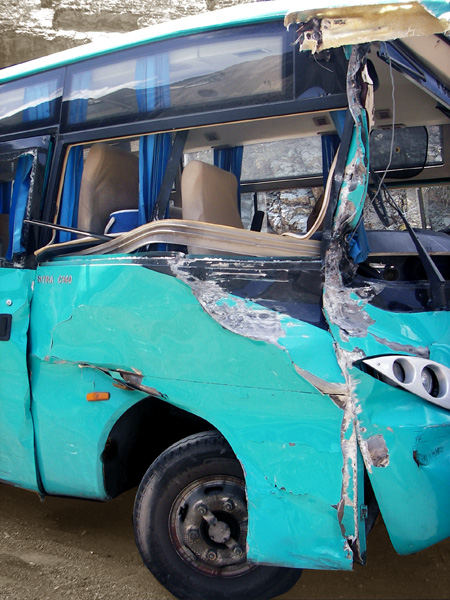 The Iran-EcoTour company (Eco Expert Ltd) in Tehran, Iran is an eco tourism nature company. They were established 1998 to promote Iran's eco tourism attractions and to improve bio-cultural attitudes among people, both locally and internationally, and to pave the way for interested tourists. They claim to have received approval from the three top Iranian Tourism Training Centres, the Iranian Cultural Heritage and Tourism Organisation and hold classes and training courses about nature and its value.

Mr Ali Adhami, the board of directors in their website says: "We guarantee well- equipped, selectively catered, safe and eco- friendly trips."
http://www.ecotour-iran.com/about_new.htm

On 10 August 2007, I took my mother and her friend on EcoTour’s one day trekking trip to Kondelus Village. Unfortunately the company hired a mini-bus driver who was not familiar with the road to Chaloos that has a series of dangerous winding sections and tunnels. As a result, the bus driver hit the wall of Tunnel No 6. As a result of the resulting huge impact, my mother fell over and was badly injured, she suffered shock of accident and injuries to her foot.

My mother needed financial assistance for medical treatment, but Ecotours told us they would pay nothing towards the cost as all the expenses would be paid for by the driver’s Third Party Insurance. This contradicts what Ecotours have told passengers that whoever travels with them is insured for 1,000,000 tomans for hospital, doctors’ expenses. I feel that they contradict themselves because they try to escape from their responsibility toward my mother and myself and other passengers.

Since 10/08/07, NOBODY from Iran-EcoTour Company (Dr Houman Jowkar, Dr Houshang Ziaie, Dr Bijan Farhang Darreh-shouri, Mr Ali Adhami) , and tour leaders (Mr Mohamad Manzarnejad, Mrs Azadeh Jouhari, Mr Ali Islam) has contacted my mother by any means and asked her how she was! i.e.-Was she alive or dead ! Apparently one of the EcoTour's director cares more about Iranian Cheetah rather than take care of my old injured & traumatized mother!!

Some times I wonder what Iran-Ecotour's response would be if my mother had been a foreign tourist traveling with them? Do you think it would be different?