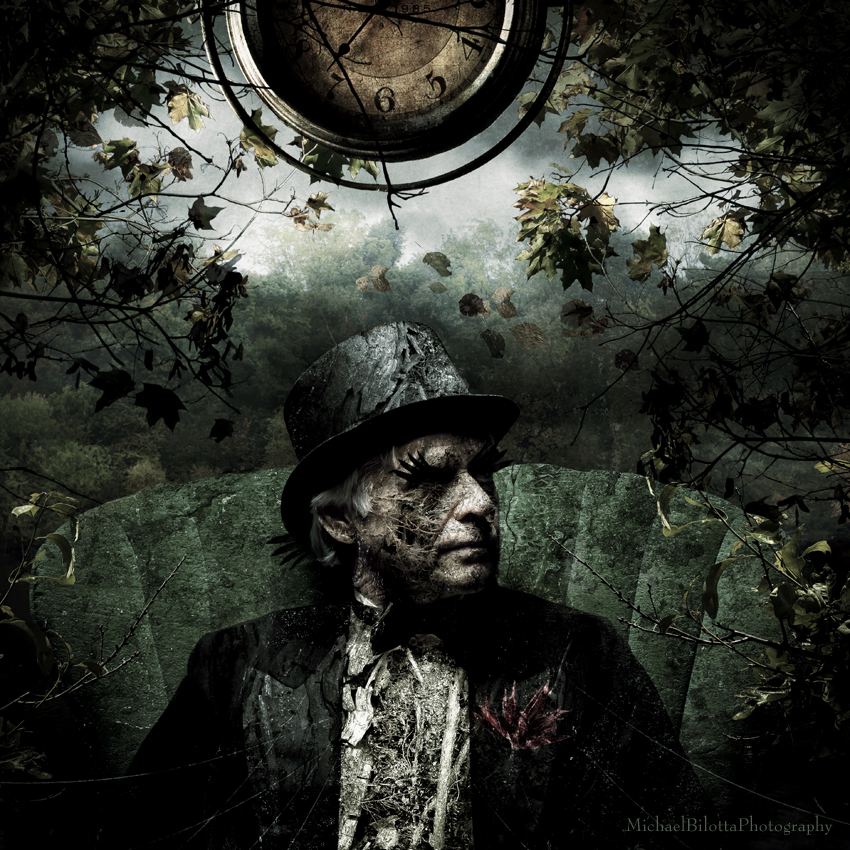 the Quiet Limit of the World

the Quiet Limit of the World

A strange image that began strangely. As ever, it was a blank model shot with a plain background, and it was not a particularly good one except for the lighting. The framing was odd - the man seemed small and insignificant with only his chest up showing. But the lighting was moody, slightly ethereal, so I wanted to see what could be done with it.

What was he looking at or looking for? I didn't know, despite inserting many objects in his line of sight to no avail. But gradually, as this image was put together, the waiting itself became the focus and the "what" became less so. It is about waiting, about being bound or trapped - unable or unwilling to move. It is about the onset of decay and death in the sense that inaction can overcome you, and perhaps waiting for something to arrive is not the best way to ensure that it does. This bears some personal material I can relate to; the waiting for ideas, the waiting for inspiration, the waiting for someone to come around - none of which are as potent as going towards them yourself.

This image is all about texture. All the textures used were of decay, and ones I have shot recently: rotting or decaying trees, patina on metal, well-worn stone, even the foliage was shot at the height of autumn - the very season of decay and death. Between the shadows of the original shot and the lines of the tree textures, I saw not just a sinister presence, not a vaguely voodoo figure, but a tragedy, and testament to inertia. We all have that tendency - we are all capable of astounding inaction, and often only necessity or danger will rouse us from our complacency and apathy. I see this man as a cautionary tale - the dangers of waiting for something to happen. He sits mouldering in a rotting chair, marking time at first, but even the clock has decayed and ceased to chime - growth all around him but in his inertia they overtake him and he becomes decayed as well - like Tithonus - cursed with immortality but not eternal youth, who waits for death that will never come. He looks west, where the sun will set, but that promise of darkness will not bring him death nor release, just another day in an endless march of days.

My title is derived from "Tithonus" by Alfred Lord Tennyson, which was based on the Greek Myth of the man who would not die - cursed with immortality but not eternal youth, suffering crippling age and decay, but forced to endure it for all eternity.

Here is the stanza from which my title came:

The woods decay, the woods decay and fall,
The vapours weep their burthen to the ground,
Man comes and tills the field and lies beneath,
And after many a summer dies the swan.
Me only cruel immortality
Consumes; I wither slowly in thine arms,
Here at the quiet limit of the world,
A white-hair’d shadow roaming like a dream
The ever-silent spaces of the East,
Far-folded mists, and gleaming halls of morn.

A Before and After version of this image can be seen on my Facebook page: www.Facebook.com/MichaelBilottaPhotography