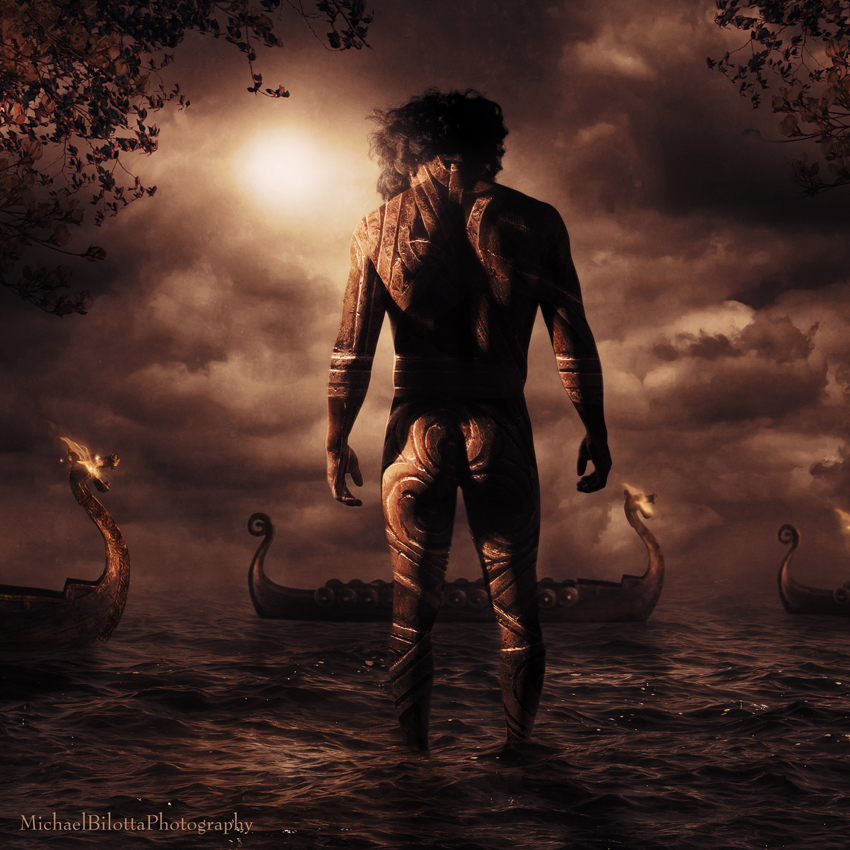 the Passing of Kings

the Passing of Kings

If there is anything this image is about, it is about the search for new things, for something more. That it is decidedly Viking in appearance is a testament to my own quest for the new, the untried. I speak mainly of objects, items for my imagery. Things have evolved over time in my process to require me to research and hunt for objects, icons, textures, anything that has a range of metaphorical possibilities.

The Key, the Orb, the Ladder, the Ocean, the Crow, the Rune, the Clock…all these items have a long, established history in our lives, in our symbolism, in our artistic expressions. They are also versatile - put a key in a person's hand and it can mean one thing, put it out of their reaching hand and it means quite something else. And so, I look for more and more objects I can infuse with context, that can imply subtly or plainly, and be both timeless as well as integral to our modern lives.

And so I went looking yesterday for something, not knowing what. Something that could photograph well, be visually interesting, and meaningful. I looked in an antique store, a hardware store. And then I found this miniature viking longboat in a new age store. It's less than a foot long, but it had enough detail to hold up under all my megapixels, so i bought it - vessels are something I sorely need, but hard to shoot in my process, as I would need to shoot them in my studio space. So I look for miniatures, good one, but they are often quite expensive.

As soon as I decided to by this I knew what I was going to do with it. One of my favorite poems, by W.B. Yeats, "Sailing To Byzantium," takes on more meaning as get older, for it is about aging, and feeling mortality and youth slipping away, The speaker of the poem is leaving his home, literally or figuratively, and sailing to Byzantium, the ancient center of commerce, grandeur and prosperity, to basque in the golden enlightenment of the kingly, the affluent, the sage. It is a fantasy, a longing for leaving the clamor of life and the frailty of old age, into an almost mythical place where age and time do not affect him. It is a last wish of sorts, to find vitality before old age and death eventually claims him.

Now what does this have to do with Vikings? Well, the Vikings were indeed part of Byzantium's history, first used as mercenaries, and later, part of the army, known as the Varangian Guard. Several Vikings sought enlistment in the Byzantine ranks to find better fortune in that prosperous part of the world, to escape from the meager, desolate homeland from which they came.

But it doesn't really matter what kind of vessel is headed to Byzantium - the journey is internal, emotional, symbolic. But Vikings did bury some of their dead at sea in boats much like this one, and these themes of old age passing away, making room for the new age, and the poem, and even the elves going west on the Sundering Sea from the Lord of the Rings factor into the sentiment behind this image. The aged, the dying, the old world, must pass into oblivion, making room for the new. It comforts us, and comforts me, to regard ages past as "golden" and the modern age as vulgar and lacking. Perhaps we all slip into this feeling of detachment, and inwardly mourn for our youth, real of idealized, when there are more years behind us than ahead.

My image shows a young man in mourning as a fleet of longboats pass before him, carrying the dead.It is meant to convey the vital, the youthful part of yourself accepting the inevitable, the years stretching on, and the inevitable voyage to oblivion we all must undertake.

Because the poem is one of the most famous of Yeats, it is almost untouchable, at least to me, to title this after that classic. Therefore, I decided to use the working title used over the last two days. This was the first title that popped into my head, and though Vikings did not have a monarchy, the spirit of the piece, and the connective tissue between the poem and the final chapters of Return of the King, very similar in intent (at least to me) is what formed the title in my mind.

A before and after version of this image can be seen on my Facebook page: www.facebook.com/MichaelBilottaPhotography