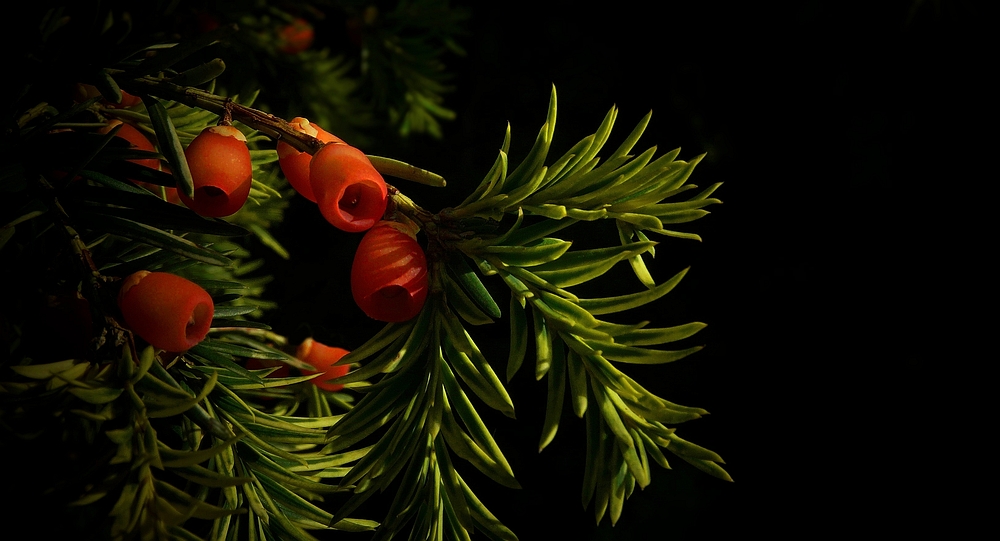 This shot shows the leaves and cones of the European Yew, a small- to medium-sized conifer and one of the longest living tree species in Europe.
Some specimen have an age of 2000 years or more.

In autumn, the bright red berry-like shaped seed cones form a nice contrast with the evergreen foliage.
Leaves and seeds are extremely poisonous for men and animals; horses (°) have the lowest tolerance, but birds like Great Tits can eat of it safely and troublefree.

Only the red aril around the seeds is not poisonous, it’s gelatinous and even very sweet tasting.
But as there are many cultivars of Yew into circulation for use in gardens, it’s probably the wisest to warn children by saying that the whole plant is poisonous.

(°) : The French army of the famous emperor Napoleon Bonaparte lost once a battle due to the Yew.
Somewhere in Europe, the army camped once for the night in a forest that was full of Yews and the soldiers let the horses eat from them.
Next morning, all horses were dead. The French army was totally immobilized and they lost that particular battle.
Only a few warriors survived. One of them was Napoleon.

It’s a true story, not a legend.