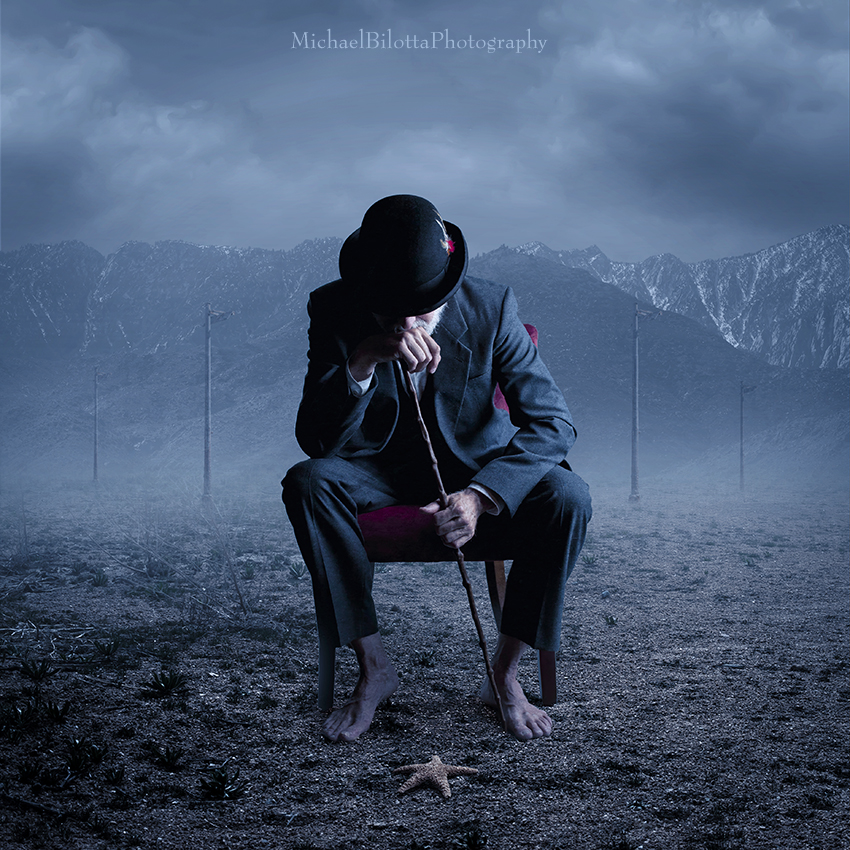 There is a sky but no definable time of day - no sun, no moon. There are power line poles standing useless and disconnected. There are mountains in the distance and a dry desert floor going on to infinity, or at least out of view. There is a man sitting with a walking stick with his face obscured in dress attire with no shoes. And there is a starfish in this arid, cold place, out of its element and likely dead.

There is no connection to these elements, but actually, their disconnectedness symbolizes a connection - all lost, displaced, disenfranchised.

There is no point to power lines with no power, there is no identity to the faceless man or why he is in this barren place alone, sitting glumly yet holding a walking stick, and this environment is no place for a starfish, stranded far from the ocean, far from home. I think that was what I was trying to convey - a sense of being stranded, a sense of distance. Everything is out of context and indefinable as a whole. We know these elements individually yet none of them belong here.

That was the exercise at work here - the letting go of logic and order and exploring incongruities. This man would look at home in this pose in a train station, on a bench, on the beach even, and indeed he was on a beach initially, but then I decided to put him in the middle of nowhere in the desert. What was he looking at? Clearly he was looking at something, so I put something logical below him: a clock half-buried, for instance, but no, I wanted him to look at something inconsistent, as the idea formed. I put a starfish there. I added mountains to dispel any notion that past the haze there is an ocean shore back there. I added four sad poles in a state of decay to frame the man, to further obscure this place, and to imply that there was something about it man made, but indefinable. Where the hell are we? What time is it? Is it cold? Why does he just sit there?

It's a riddle to me even, but that appeals to me. Nothing makes sense and there is a feeling of suspension to it all. A land of misfits, a collection of people and things all stranded, together and alone. They are all stranded, all lost, all coming to some sad end.

I knew there was a song this reminded me of buried in my head, and then it occurred to me, from one of my favorite Peter Gabriel songs, "Here Comes The Flood," the lines:

When the night shows
the signals grow on radios
All the strange things
they come and go, as early warnings
Stranded starfish have no place to hide
still waiting for the swollen Easter tide
There's no point in direction we cannot
even choose a side.

A Before and After version of this image will be available on my Facebook page and my website: