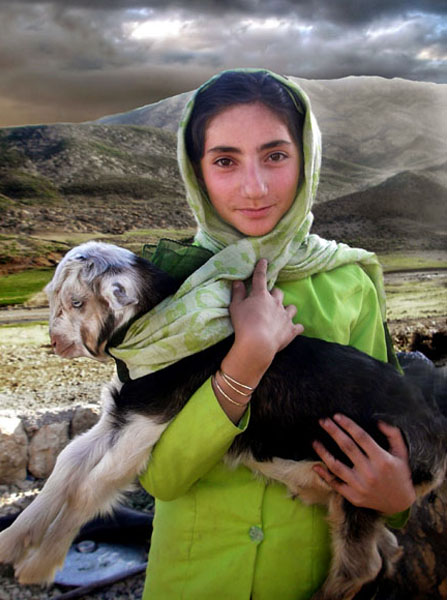 Last year, I travelled with a nature tour company to Zard Koh area where Ashayer-e Bakhtiari live there.

The Bakhtiari tribe, which numbers more than 800,000, inhabits an area of approximately 67,000 sq. km (25,000 sq. mi) that straddles the central Zagros Mountains in Iran. Although only about a third of the tribe is nomadic (the rest are settled agriculturists), the nomads embody the Bakhtiari cultural ideals. They specialize in producing meat and dairy products and migrate seasonally with their sheep, cattle, or goat herds from high plateau pastures, where they spend the summer, west of the city of Esfahan, to lowland plains in the province of Khuzistan for winter herd grazing. Their migration is among the most spectacular known among nomadic paternalists anywhere. They are obliged to cross mountain passes at about 3,050 m (10,000 ft) and therefore have to time their movement with extreme care in order to minimize the danger of early snowfall, flooding mountain rivers, and lack of grazing. Traditionally these dangers took a heavy toll, but in recent years the government has helped the migration by building bridges, improving the route, and setting up fodder supplies en route.
The Bakhtiari speak a dialect of Persian called Lori and are Shiite Muslims.

The bakhtiaris are divided into two major groups- the Haft Lang and the Chahar Lang - which in turn are divided into tribes, sub/tribes and clans. No on seems to know precisely how many Bakhtiaris there are in Persia (Iran); one estimate, which may be on the high side, is of 450,000, perhaps half being migratory and pastoral, the rest agricultural and settled.

The Bakhtiari men and girl live permanently in the village of Karyak, about 120 miles south of Esfahan where the Kershan River, a tributary of Karun, serves as the boundary between the Bakhtiari and Boyer Ahmadi tribes.