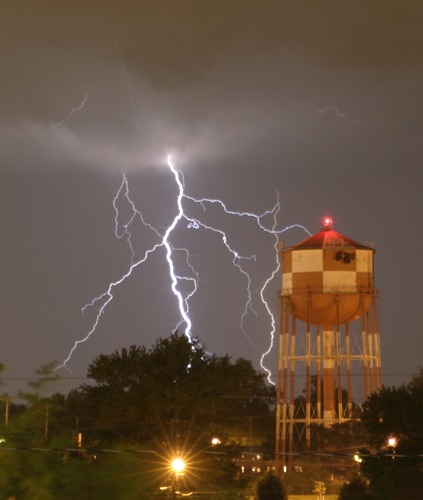 This was one of several long exposure test shots using a Canon EOS 10D. The lens is a 24-70mm f/2.8 Sigma EX. I made the shot at about 2:00am as a storm passed north of Aberdeen, MD. With the camera mounted on a tripod I composed my image, set the focus and then turned off the autofocus on the lens. After a few test shots to get the general scene exposure I settled on :30 sec and an aperture of f/11. The result was a well exposed scene and fairly sharp capture of the actual lightning. The series of shots convinced me that the flexibility of digital is much greater than most people realize, myself included until this shoot. The best part is being able to actually review what you've captured right away as opposed to waiting anxiously for chromes or prints to come back. Especially with something as unpredictable as long exposures this is a great benefit.