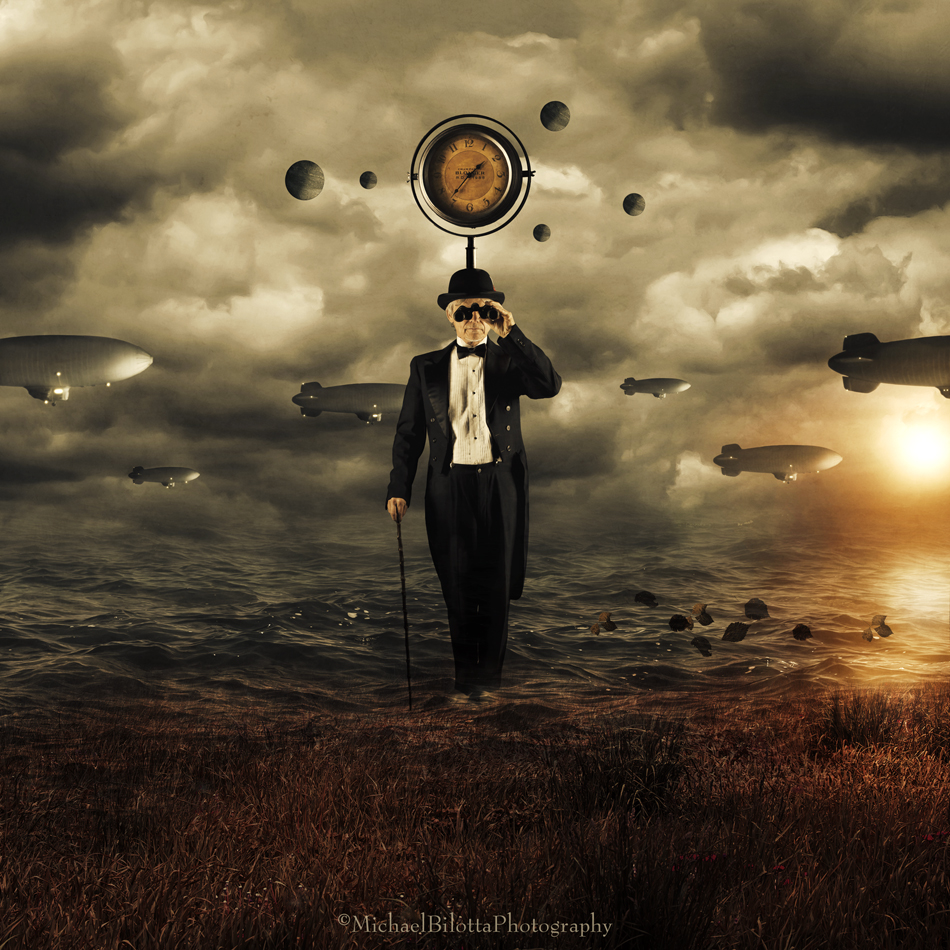 Does Anybody Really Know What Time It Is?

Does Anybody Really Know What Time It Is?

What is time? Beyond the mathematics of it, we have come to accept it as a species as something definitive, linear, and absolute. Certainly it is measurable, but who determined the scale with which to measure it? Speaking of time, this image took a lot of it - five days of toiling and trying things until it finalized to what you see here. I had the scenics done on day one, the environment, but what to put in it remained a mystery.

Adding new items into the symbolism steam pot is not easy. They need to be flexible metaphors, open to interpretation but also visually interesting. Clocks are something I've used before, but this is a new one, and I liked the way it looked - retro, but also a little nautical and art deco. I had the model use some old binoculars in the shoot, but the hard part about using them in a photo, just like the telescope I tried a few months ago, is knowing that the things they are looking at are going to be off camera. So it becomes a problem - what is he looking at? The zeppelins make their second appearance here, something I've wanted to do since I built the little model. A fan of the show "Fringe," I admired how the show used them to denote an alternate reality, one where the old style airships were still in use. They also help support my preference for vintage style in my imagery. Here they suggest days gone by, another era, passing into the setting sun.

It was an old song from the band Chicago that not only gave me my title, but also the inspiration for this image. Time and aging have been on my mind lately, and the shadow of ageism is visible to me even though I am in the early stages of middle-aged. The world of photography and art tied through social media is a very young game, and it seems that a lot of networks and sites are mainly interested in your work only if you are a wunderkind, a 20something up and comer. It feels like I am late to the party, and it can be frustrating. Certainly the flash and wow factor can be achieved by the very young, but many cannot add depth and meaning to their imagery simply because they lack the perspective and experience of living a few decades. The image here has little to do with the lyrical content of the song, but I remember this old chestnut in my early childhood on AM radios in my parent's cars, and it speaks to me now as pure nostalgia.

Despite my preference for verdant greens and autumnal palettes, I wanted to give this one a warm, summer tone. I also wanted this to be lighter image, a bit of whimsy, after two darker ones. It's about nostalgia and searching for time gone by, scanning the horizon for the meaning of the years, looking for the past. The time is connected to the man, part of him, inside him, and I found it amusing he would seek the memories and times lost when they are literally coming out of his head. I thought the clock looked a bit like a nautical instrument so I decided to add little planets in orbit around it, another reference to cycles and time. Does it matter what time it is, how old you are? Is there really a point where you become to old to achieve something? It remains to be seen.