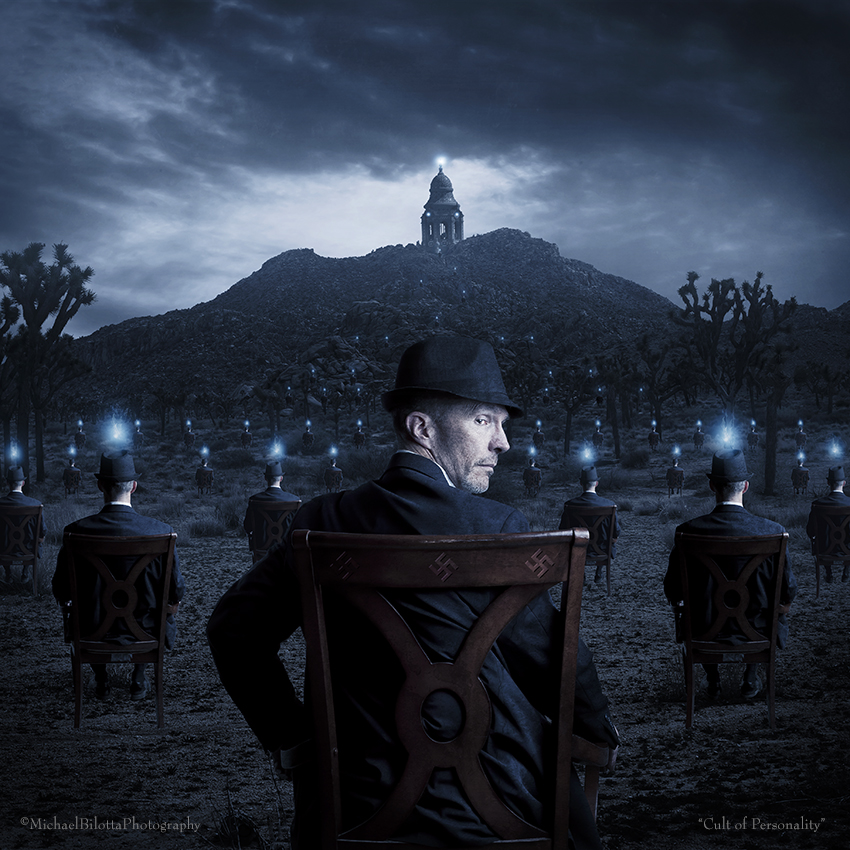 A partial definition for this term: A cult of personality is similar to hero worship, except that it is established by mass media and propaganda usually by the state, especially in totalitarian states.

What is the lure of cults? What brings the masses to a unified mind in the idolization of an ideal, a charismatic leader or a way of life? The throngs gathering - a powerful image, is one that I've always found somewhat disturbing. This extends to casual parties, sporting events, and particularly religious or spiritual gatherings.

I remember growing up going to church on Sundays and being really uncomfortable at the responses uttered in unison to the mass service after the cues from the priest:

All of this was said in robotic monotones, as if the minds uttering them were switched off.

Needless to say, the church and I parted ways as soon as I was able to make that call for myself, and I have yet to belong to anything approaching a religion or party. Some of us are just built that way - built to avoid the masses, preferring to listen to one voice instead of one thousand all speaking as one.

The origins of this image has a lot of influence wrapped up in it. Images from childhood, images from films, and one rather dubious fascination of the morbid variety with Hitler's Third Reich. A few months ago I was considering doing a series of images based on Hitler - about the man he became and how he became the monster he was. No one starts out a monster, no one intends to be a horror to the world - but the nuances and the humanity of that tragic journey were not to be - after asking around, it seems that the very act of putting a human face on Hitler is incendiary at best, and probably best left alone.

The part of his tale that interested me is not the evil he unleashed, not the hate that consumed the world around him, but the young aspiring artist he wanted to be and what circumstances turned him into the figurehead of the Nazi Party. I could not imagine this to be anything misunderstood by anyone - I am not condoning or sanctioning anything he believed or actions he took - but apparently the legacy of that dark epoch lives on and the humanization of such a monster is not one that will likely be understood.

So that idea was scrapped, but not entirely. As I started building this image, placing the scene in the desert, all these images of cults started springing up from my memory bank of films and books. One particular and striking image was from "Raiders of the Lost Ark" in which the titular mystical object struck the legion of Nazis causing spectral glowing wounds in their chests all at the same time. This led me to adding the Christian Biblical tongues of flames over the masses, somewhat mimicking the distant temple on the mountain. From the beginning, my central character was going to be distinct from the collective - a motif I have used a few times before, an ode to the individual mind, the singular personality amongst the brainwashed masses.

This is where the idea finally solidified and circled back to the origins of young Hitler, the would-be, failed artist with a fascination for the occult. Perhaps his attending various reformation party meetings in post-war Germany influenced his striking personality and galvanizing ability to speak in public. There are a lot of elements to what makes someone take a path in life, and I am not a historian on this topic or this man, but the parallels of the religious cult and the Nazi party cannot be ignored - any hierarchal structure needs a leader, a focal point. Hitler saw an opportunity, he saw a people needing a future, a cause, a purpose, and he forced himself upon them until he achieved the pinnacle of his ambitions.

In this imaginary, fictitious depiction, we see a man with an idea forming. He is attending this cult, this mysterious and ominous ritual, but he is not invested in the meaning of it, he is not imbued with the power of what it is intended to inspire. He is seeing a blueprint, a pattern of force that can be transcribed to the desperate and hungry people of his adopted country. He sees the power of the figurehead, the propaganda and pageantry and ritual as a way to achieving that title for himself, and he sees the unified people in front of him one day looking up at him, the self-described "High Protector of the Holy Mountain."

Without exhausting this topic further, I decided to add in the swastika symbol on the chair he is sitting in. It bears mentioning that this symbol has been in use in human cultures for 5000 years, and literally means "good fortune" or "well-being." This symbol was adopted by the Nazis and Hitler himself designed the variation that became the symbol of his party. There was a story I read about a relic of a throne that the German's collected for Hitler, with his fascination with the occult, that the swastika appeared on. That the chair he is sitting on has this symbol is not intended to represent what the symbol became and will likely forever be negatively associated with, but rather the origins of Hitler's rise and the propaganda that he helped create in his pursuit of his never to be "master race."

Symbols are not evil, they are assigned qualities by history. The pentacle is not satanic, and this runic symbol of the cross was not created for or by the Axis of Evil, it was used by them and forever changed as a result.

So there we have it - a rumination of cults, on the collective mind and the dangers they can become, the power of the singular mind that can see a clear path around it, and my never-to-be-realized concept of Hitler, the young man who wanted to be an artist but became one of the most enduring symbols of evil, all represented here.