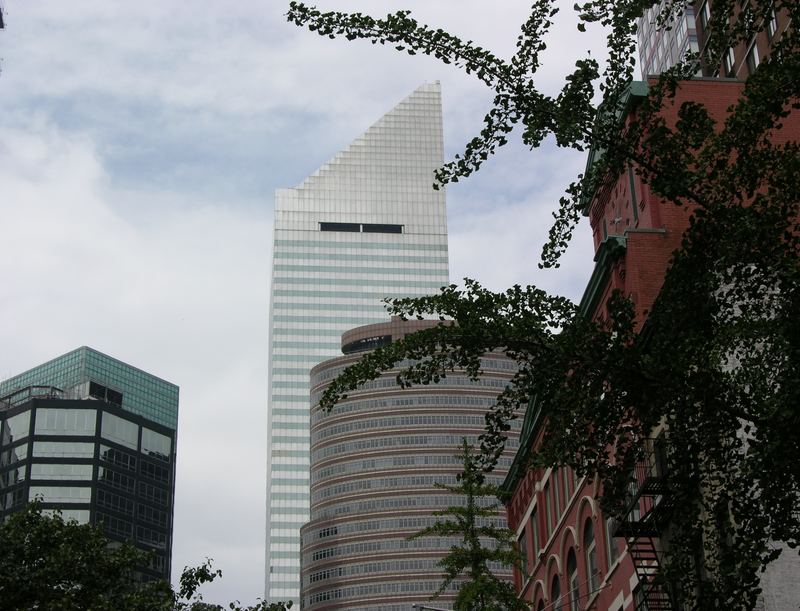 Driving crosstown (east to west) on 53rd street in New York City. The Citigroup Center is one of the largest skyscrapers in New York City, United States, located at 601 Lexington Avenue between 53rd Street and 54th Street in midtown Manhattan. The 59-floor, 915-foot (279 m) building is one of the most distinctive and imposing in New York's famous skyline, with a 45° angled top and a genuinely unique stilt-style base. It contains 1.3 million square feet (120,000 m²) of office space, and the 45-degree angle at the top of the building was originally intended to contain solar panels to provide energy (this idea was eventually dropped, however). It was designed by architect Hugh Stubbins Jr. for Citibank, and was completed in 1977.
The Lipstick building (brown elliptical with glass windows) in front of the Citibank Tower.Created by architects Philip Johnson and John Burgee, this postmodern office space, better known as “The Lipstick Building,” was completed in 1986. The structure earned its nickname due to its unusual shape. Nestled among blocks of standard rectangular Midtown office buildings, its oval contour stands in three layers stacked like an opened lipstick tube. The red granite and stainless steel exterior is a true departure from traditional New York architecture and enhances its resemblance to a cosmetic. Look beyond this metaphor to appreciate the first two of the building’s 34 stories, which contain an enclosed glass lobby flanked by a colonnade of red granite pillars and a pedestrian plaza. The lobby houses a newsstand and The Lipstick Café, which serves the office building’s corporate crowd breakfast and power lunches.