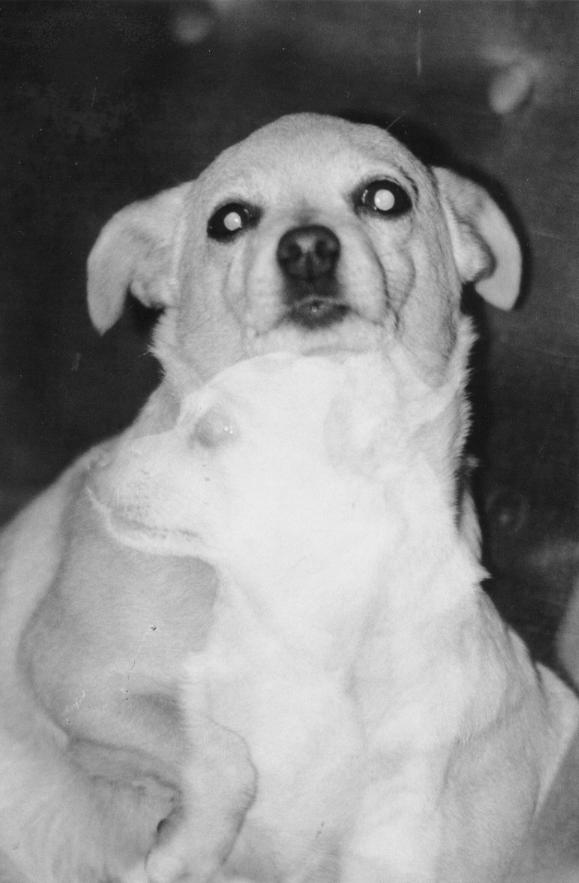 TRYING out a new camera, Dutch-born healer Jozef Wolak took some photographs of his dog Boule.
When he received the pictures Jozef saw one had a spirit extra of a second smaller dog.
"I immediately recognised it as being one of Boule's puppies which died from a car accident in 1978 or 79," said the healer last week.
"Some people say an animal's soul goes back and integrates with the group soul, but this is proof that after at least seven years the puppy is still there with an astral body."
Though Boule mothered 14 offspring there was a very strong bond between her and the "dead" pup.
After seeing the photograph , Jozef took his camera to an expert, who "said it was completely impossible for this to be a double exposure."
Further evidence came when Jozef met his colleague Eileen Dann. who works at the New Age organisation founded by the healer in Brussels.
"I asked her spirit guide about the photograph — and he confirmed it was one of Boule's puppies," Jozef continued.
"He said we had to understand there could be as strong a bond between animals as between humans."
Boule was Jozef s companion for 11 years. The pet "was always happy, and had a tremendous lot of love," said the healer.
"She was psychic. Whenever entities came in, she started barking."
Sadly Boule passed a few days ago after an operation.
Globetrotting Jozef, just back from a tour of several European countries giving seminars and workshops, was
due to leave for Tunis, North Africa.
(Part of the article)