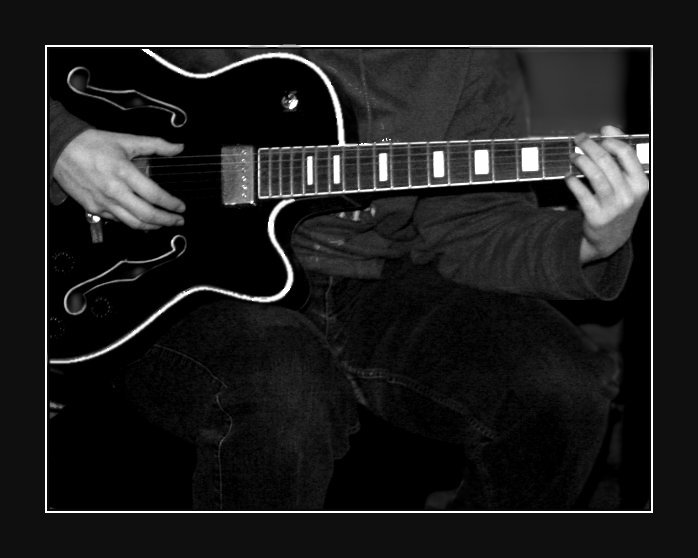 (a special edition for my English-speaking friends)

A Humbucker is a very useful technical device on an electric guitar
that makes a fine, clear, and full sound,
as you may know it from Gibson's good old "Les Paul"-guitar.
http://en.wikipedia.org/wiki/Humbucker
A humbugger is a person who makes his words sound good
to make you believe in nonsense.
Both have to do with art, and both may sound good in your ears,
but their effect is much different.
TYO
(think your own)
:-)

***
I received some requests from anglophonic buddies who wanted to know
what the big bunch of of letters in my profile is about.
Here is kind of a translation.
Taught by bitter experience that nothing in the world is as different as the sense of humour
I hereby solemnly declare that the following text is both fictional and satirical
(and I love the work of of Cartier-Bresson and Robert Capa)
***

An open annotation:
@Henri Cartier Bresson
Dear old ex-buddy!
Back in the forties I put you on my buddy-list, because I thought,
you might become a real photographer, and you even had a Leica,
and how could you fail with a machine like that?
But you diappointed me deeply.
Don't try lame excuses, your „Giacometti“ is completely
motion-blurred, couldn't you use a flash?
http://www.ruhr-guide.de/artikel_pix/c-bresson_Giacometti.jpg
And that Marilyn is a nice looking model, but how could you take
a picture of her sitting at a table, with a terrible background, and
completely dressed? I think it is pointless to talk about editing and composition!
http://digilander.libero.it/puntocontro/immagini/arte/foto_magnum3.jpg
And what is the ladder doing in your „Pierre Bonnard“? Have you
never heard that lines descending from left to right are the absolute
„no-go“? You can read it in the cheapest beginner's - manual!
http://www.jmcfaber.at/artists/cartierbresson1.html
But the final highlight is the „Barrio Chino“
http://www.afterimagegallery.com/bressonbarriochino.htm
Out of focus, noisy, bad contrast, not even the onions are really
recognisable, but you uploaded this botch to the "onions"-section,
and one of your payed-off, aboulic buddies dared to nominate
that thing for the gallery! 15 : 987 votes! That was well deserved.
And the so-called Ezra-Pound portrait! No usable background, the
shabby old seat, and the whole thing completely irridated! This is,
of course, unworthy of the fotocommunity, not only of the gallery.
http://poezibao.typepad.com/poezibao/images/ezra_pound_copie.jpg
Compare this sorry effort to my "Palisander-cicada in front of the
Aserbajdjanian night-sky"!
There you can see how one can take bright, clear, and well-focused
pictures even in difficult conditions of light, you just have to take some
time, and a new cam would help either. But in actual fact I have given
up all hope that you could ever become a real photographer.
You had time enough to try, but you simply don't understand
what photography is about: It is about freedom!
Freedom from blurred, noisy pictures, hard shadows, und irridation!
And of course it takes great colours, crispy nature, naked girls and fine
digital editing, all else is marginal, and we really do not need your blurry
and noisy stuff! You should have trained a bit of digital editing instead of
fumbling around with those old-fashioned gelatin-prints.
I took you from the buddy-list and precautionary put you on "ignore".
Greetings
Wolfgang

P.S.: It is pointless to go and cry on your mate Bobby Capa's shoulder.
He is no better than you! Shooting three rolls of film with two customised
Leicas during the Normandy-Invasion, but not one picture that is really
focused! And he even wrecked both cameras, just because of a bit of
mortar-fire.
http://www.skylighters.org/photos/robertcapa.html
If he had just stood still for some seconds, maybe even the muzzle-fire
of the machine-guns would have been recognisable! But the way I
know him, he will find dull excuses like fc-compression, or the lab-assistant who allegedly buggered the films.
His picture from the Spanish Civil war, the one which was once hanging
on the wall of every student's-room, is said to be a complete
fake anyway, so don't talk about Capa to me!