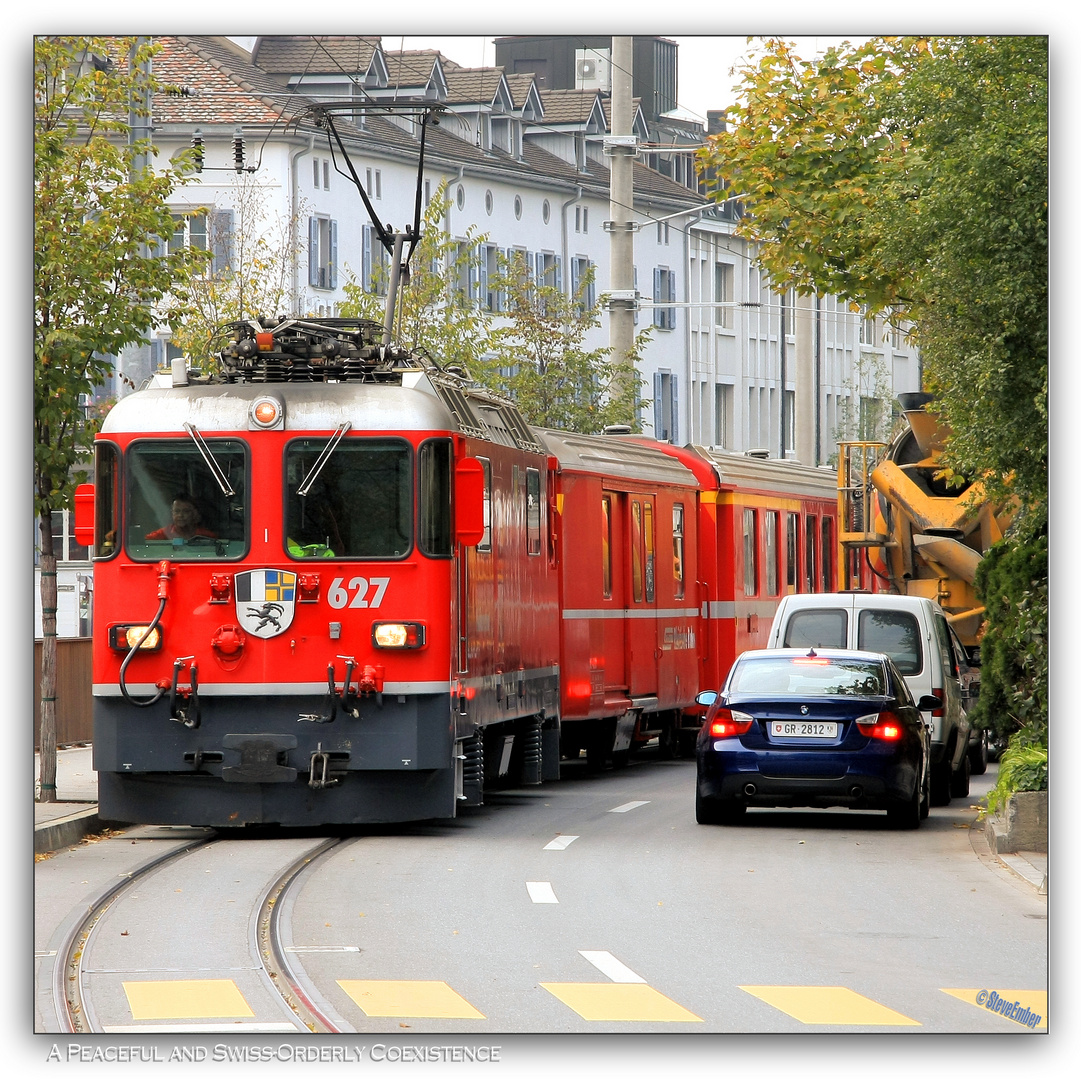 A Peaceful and Swiss-Orderly Coexistence

A Peaceful and Swiss-Orderly Coexistence

The train is heading to the holiday resort village of Arosa. The BMW, van, and cement mixer
are heading for central Chur. In Swiss-orderly fashion they share the narrow city street
with no worries over their disparate road-mates going in the opposite direction.

The Rhätische Bahn Arosa train is being pulled by Ge 4/4 Series II electric locomotive No. 627. She was built in 1984, and was one of the most recent of her class to be updated with new control instrumentation in 2008.

Her name is “Reichenau-Tamins.” Like all of her stable-mates, she is named for a place along the many routes through Canton Graubünden served by this extensive rail network of bright red trains. Reichenau-Tamins are the neighboring towns at the confluence of the two branches of the young Rhine, the Vorderrhein and the Hinterrhein. The hyphenated station is the junction point of two major lines of the Rhätische Bahn.

In addition to her “local” badges (not seen in this mostly head-on view, as they appear on the locomotives’ sides), she proudly displays the Graubünden crest on both her “front” cab sides.

If 627 has a favorite tune, it might be The Beach Boys’ “I Get Around,” as she has pulled trains on routes
well beyond Chur-Arosa, all around the RhB network, except for the Bernina Line – she doesn’t do DC ;-)

As can be seen in the photo, the RhB is a narrow (meter) gauge railroad,
allowing for tighter curvature on its winding mountain routes. That
does not mean its carriages are in any way “cramped” or narrow – just that the rails are closer together!

After sharing the roadway with vehicular traffic for the first stage of her journey from Chur to Arosa, 627 will take her
train away from cityscapes, in a scenic climb through the forests into the mountainous terrain that leads to Arosa.

More Arosa-Bahn street running...
and the scenery ahead...


And at her namesake location on the RhB...